We arrived in Hong Kong for a tourism convention, but travel from Hong Kong Airport to WanChai by car was impossible due to the road being closed.
So, after purchasing tickets on KLOOK we jumped on the Hong Kong Airport Express, a 24-minute ride to Hong Kong Station.

From the airport to the train without even needing to visit a service desk! It was so convenient. 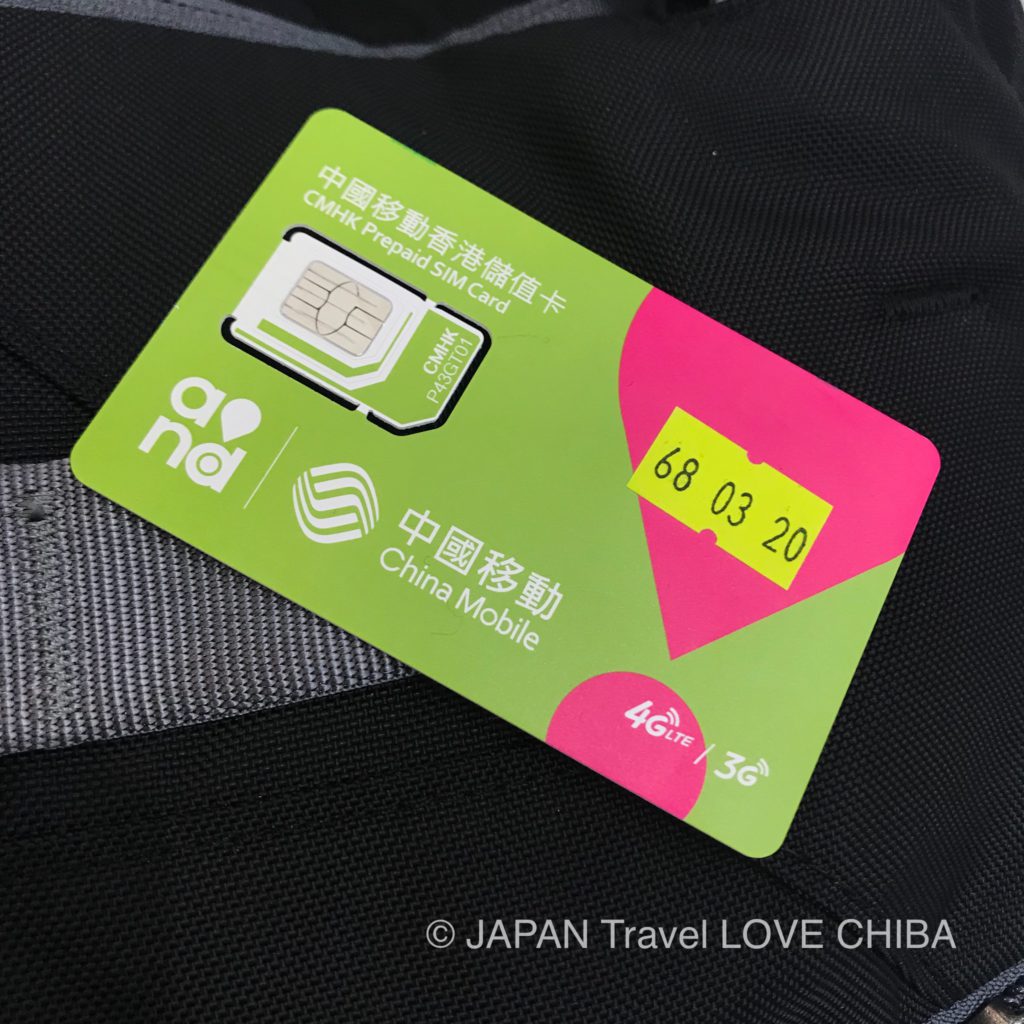 We were also able to use KLOOK to purchase a SIM card at the same time. Even though the Airport Express had Wifi, we decided to get the SIM before leaving the airport.

The free shuttle bus from Hong Kong Station also makes it easy for those staying in surrounding hotels. 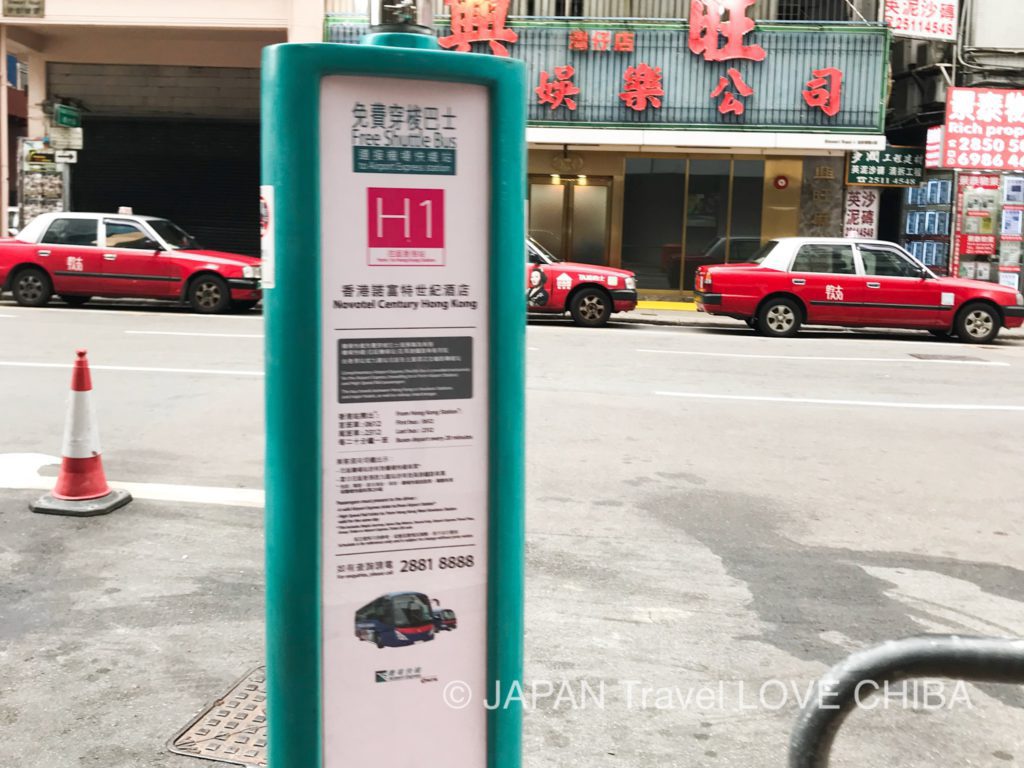 The Hong Kong Convention and Exhibition Centre also had a convenient bus stop. (However, the road was closed on the day of the event so I traveled using MRT.) 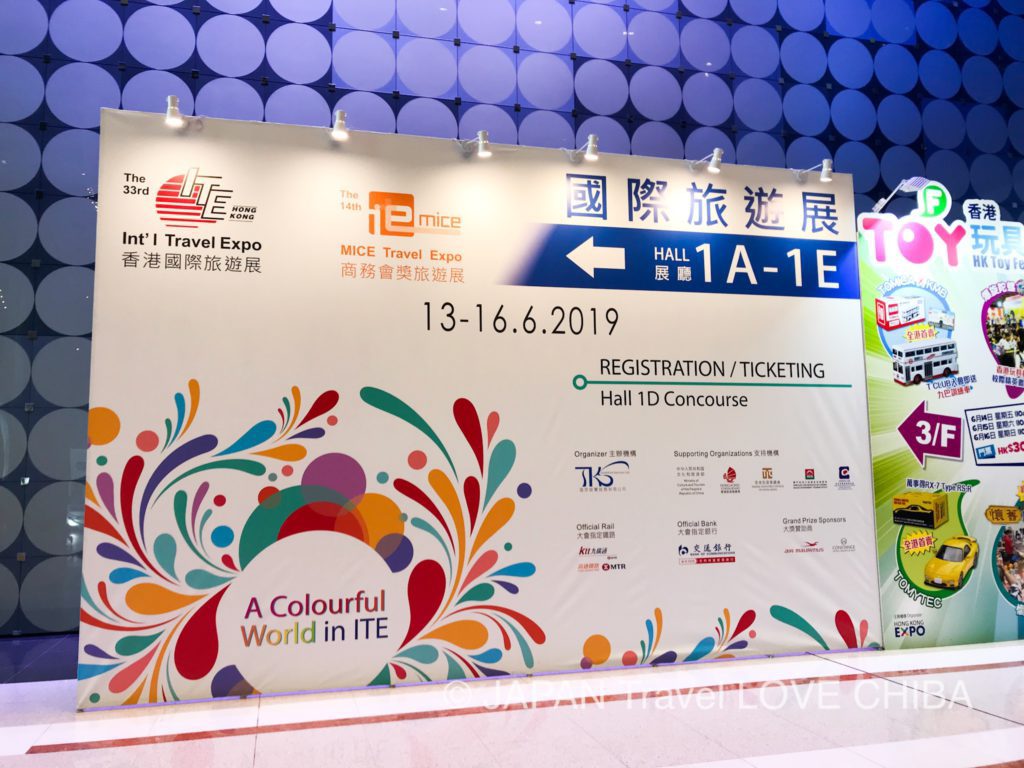 On the day of the convention, I saw that my app of choice on business trips, KLOOK, was setting up an extravagant booth. 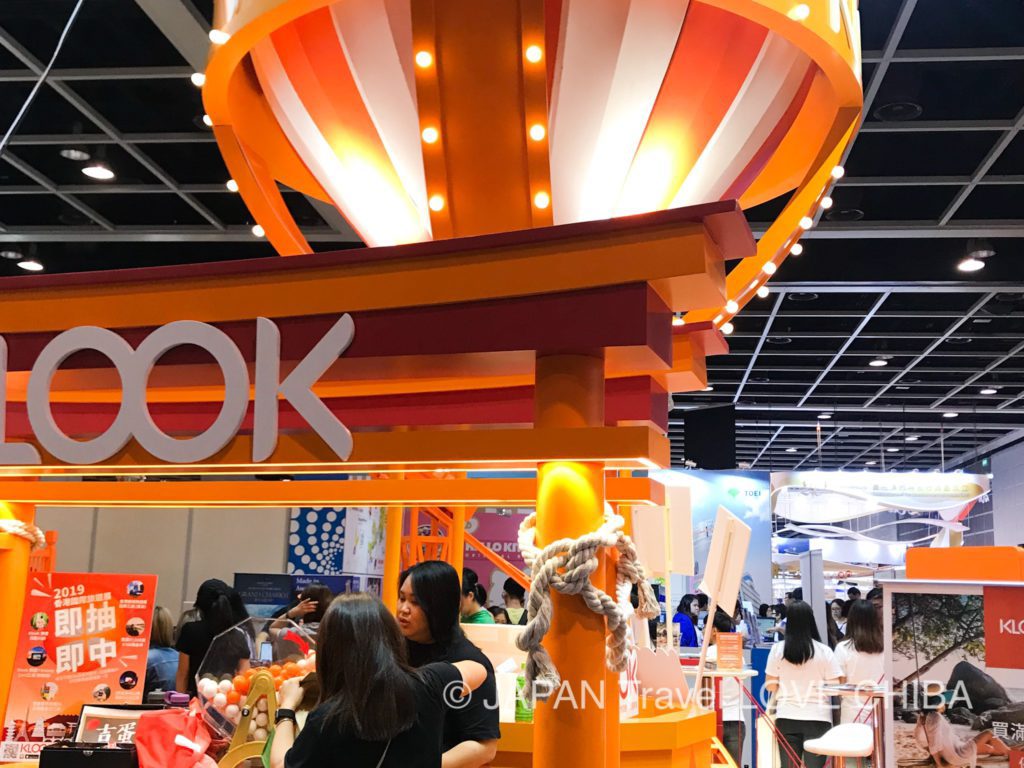 In the past, they didn’t use much Japanese, but recently the amount of information in Japanese has been increasing with the number of Japanese users.

The merits:
-Official tickets (especially those from the airport) are often cheaper
-You can gain user points
-The number of countries where you can use it continue to increase
-They offer quick support if you experience purchasing problems

On the last day the roads were re-opened and we were able to catch the bus back to Hong Kong Station. We were able to check-in at the station without even needing to go to the airport. 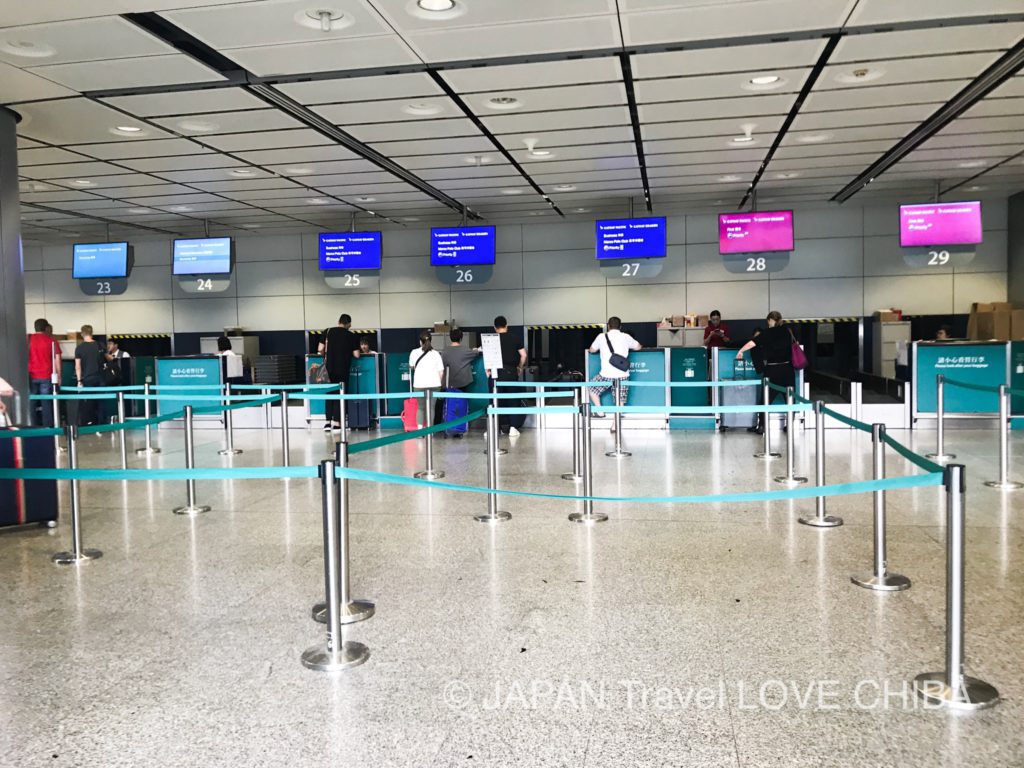 They also stored our luggage, so we could walk around the area bag free. It was all incredibly convenient.

I tried the egg tart from the popular “泰昌餅家 Tai Cheong Bakery,” 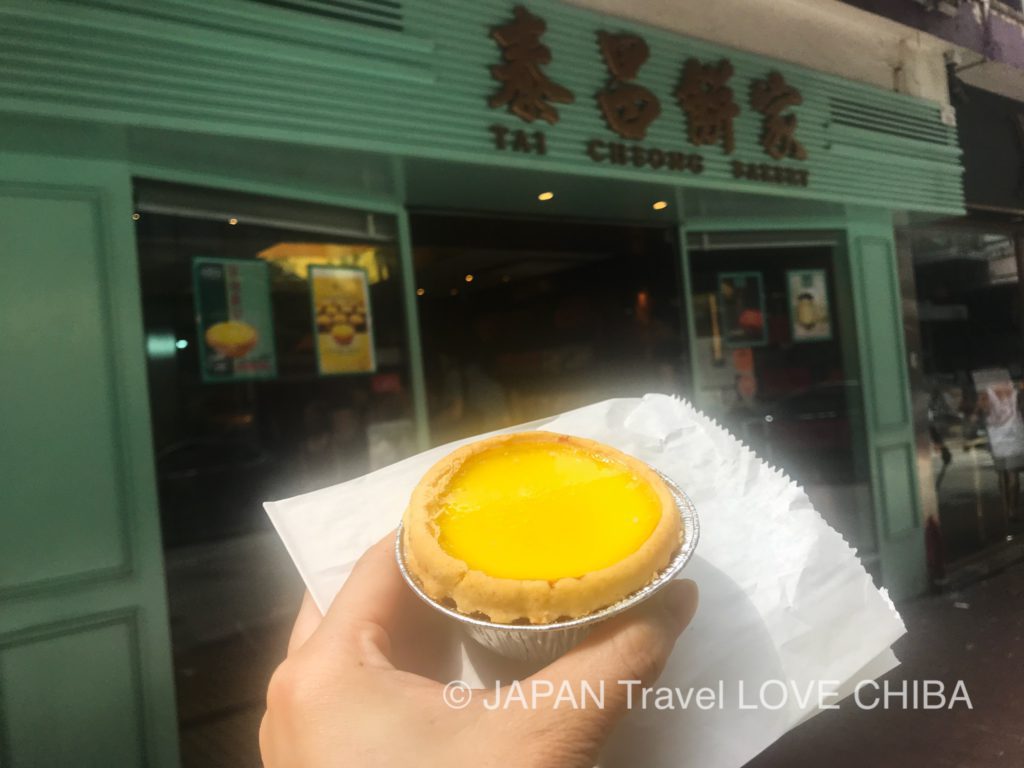 and bought a drink from “茶狼 Cha long.” 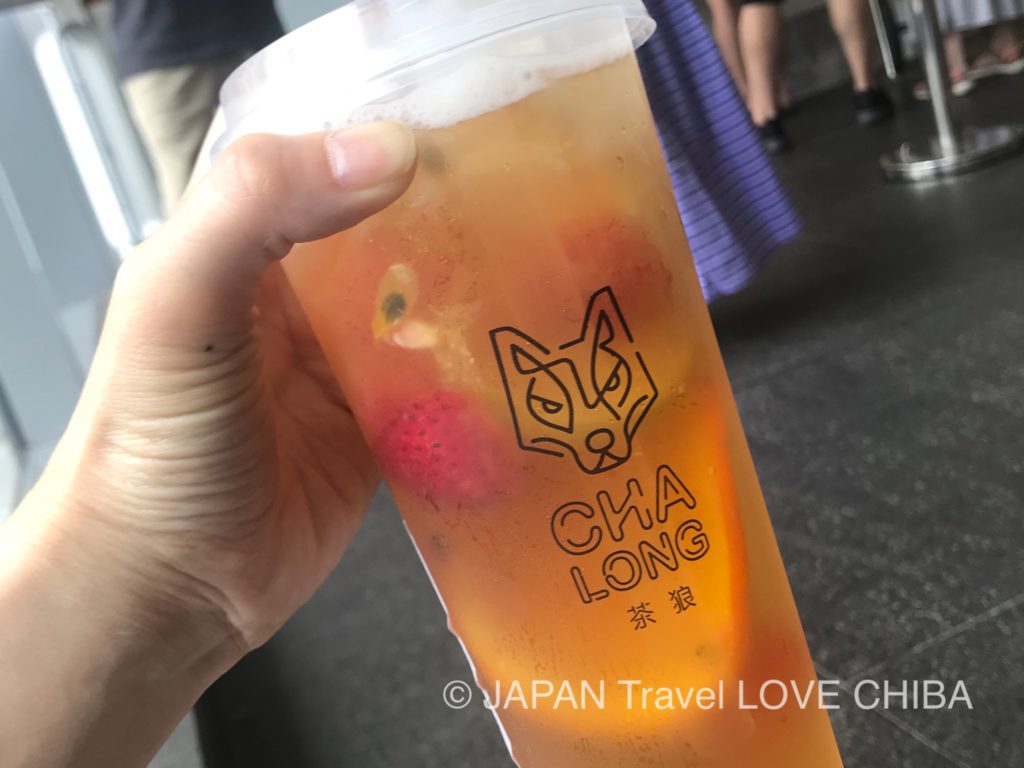 Like Japan, there are a lot of establishments in Hong Kong that are cash only. For visitors to Japan who prefer using a card, I can relate to the difficulties of having to carry cash.

Japan is trying to transition to a cashless society, I wonder what the future holds.

This trip to Hong Kong coincided with the many demonstrations going on there. It was heartbreaking to hear about the many young people caught up in these events. My heartfelt thoughts go out to those who have been injured and who have passed away due to the current political situation.

The Hotel Kamogawakan, with its ocean views, is a popular accommodation for international travelers. Recently renovated, the rooms are new and beautifully designed.
For more information see below. Enjoy a delectable evening meal. Unlike hotels, ryokan often offer course meals.
It would be difficult to find such great quality at a similar price when eating out.
Japanese Cuisine, known as "Washoku," is recognized worldwide as a UNESCO Intangible Cultural Heritage.
Washoku is based on the basics of "one soup and three vegetables," which is said to give the ideal balance of nutrients.
The skilled use of "Umami," a flavor category distinct for its savoriness, allows for delicious cooking without the use of animals fats. This type of diet can help to burn fat and lead to a longer life.
Among the already healthy Washoku menu, there is also a vegetarian menu.
More than anything, it is the skill of these Japanese culinary experts who craft the wide menu selection.
Lodging with vegetarian and vegan options can still be difficult to find.
Here we offer both a variety of options and lodging to match your needs.
*No nutritional specialist available
*Due to the nature of restaurant meal preparation and possible cross-contamination, meals may contain traces of animal products.
With spa facilities to also enjoy, we hope to serve you during your next visit. 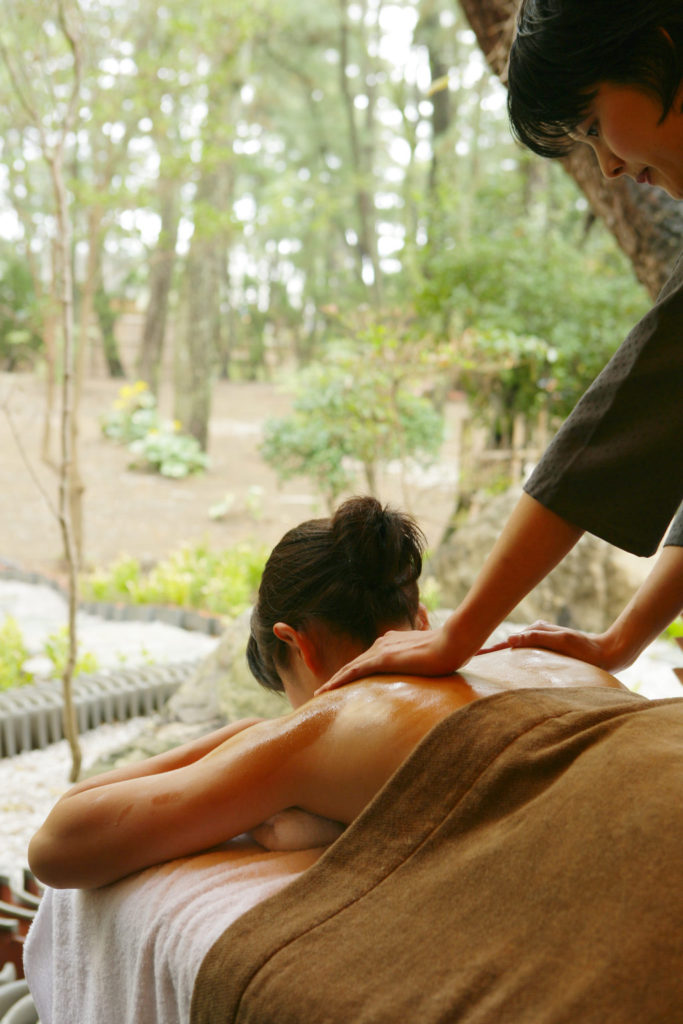 Relaxing at the Ryokan | Recommend Travel

Have an experience that can only be found outside of the city at a Ryokan, traditional Japanese-style hotel. A typical vacation in Japan is filled will local food, walks through the gardens, and unwinding…

Green Tea is a popular gift among visitors. Many different brands can even be found in convenient stores.
We would like to introduce a type of green tea that is bottled like wine. 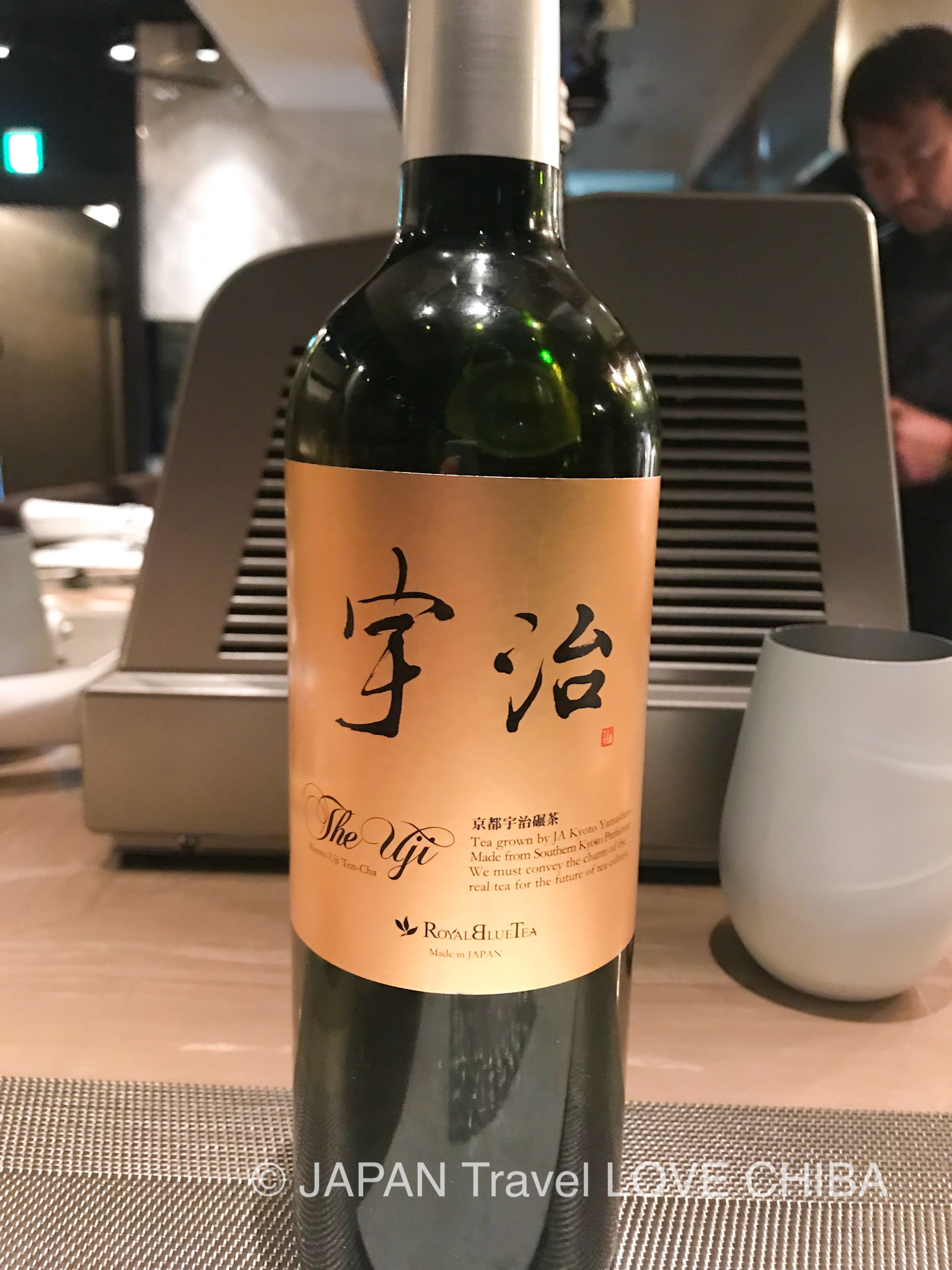 END_OF_DOCUMENT_TOKEN_TO_BE_REPLACED

The Singapore Hotel played host to this year's NATAS 2018, where we set up a booth. This year we made it to NATAS 2018 held in Singapore.We had many visitors stop by the LOVE CHIBA booth.We distributed material for the City of Sawara, highlighting their signature town-scape of old Japan,… 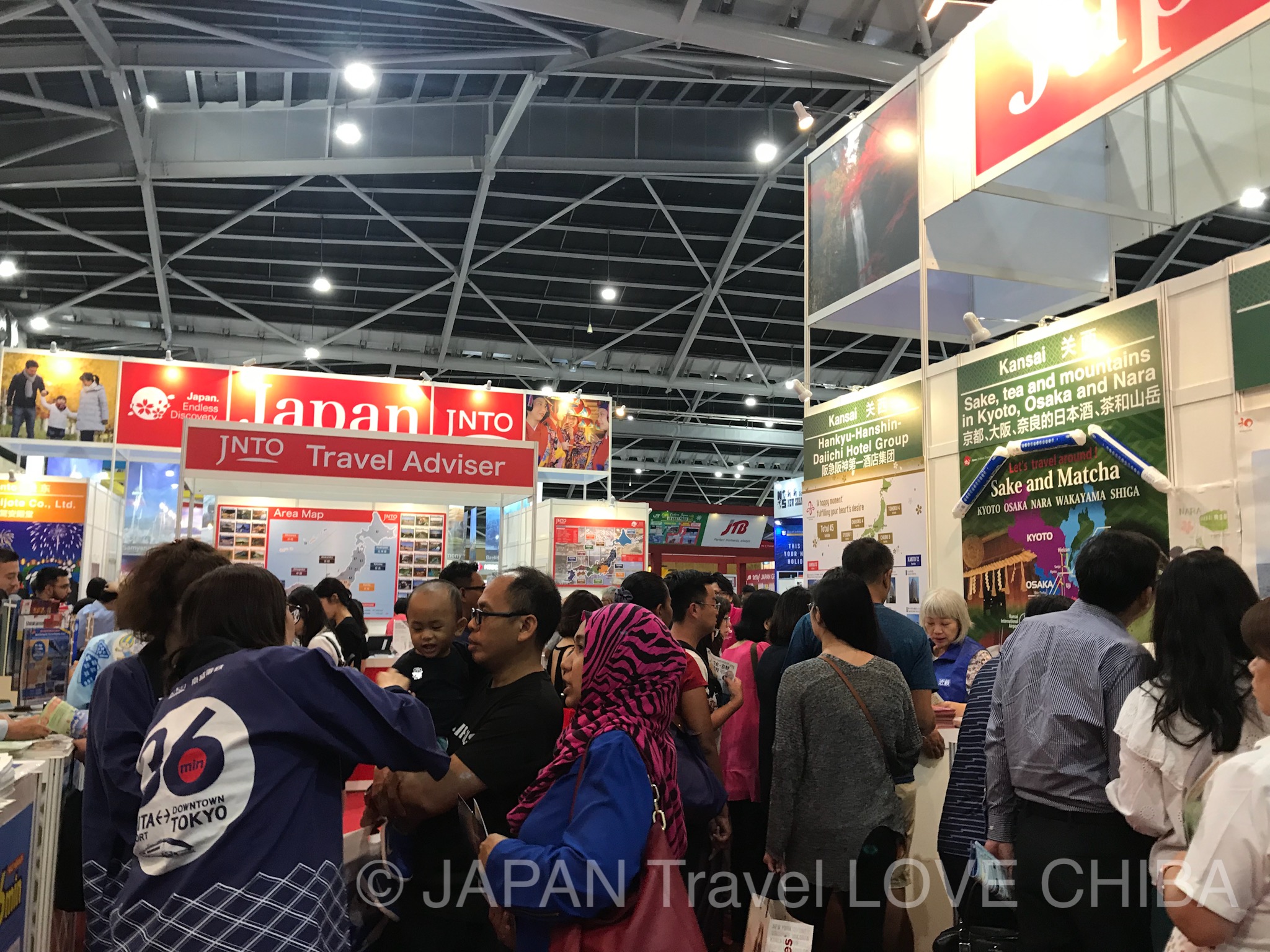 END_OF_DOCUMENT_TOKEN_TO_BE_REPLACED

Travel along the coast in one of our popular Go Karts. No need to worry, enjoy the ride as one of our navigators lead the way in this thrilling tour. END_OF_DOCUMENT_TOKEN_TO_BE_REPLACED

In Chiba Prefecture, there are a variety of regional ramen flavors. One of which, known as Takeoka Style, can be found at Futtsu City’s “Umenoya”.

Umenoya stands among residencies in the corner of a fishing village. Easy to miss, the store is a favorite ramen shop among the locals. It is a bit far from the station, so we recommend going by car (there is parking available nearby).
The shop often has people lining up to get in, so be prepared to wait, especially on the weekends. 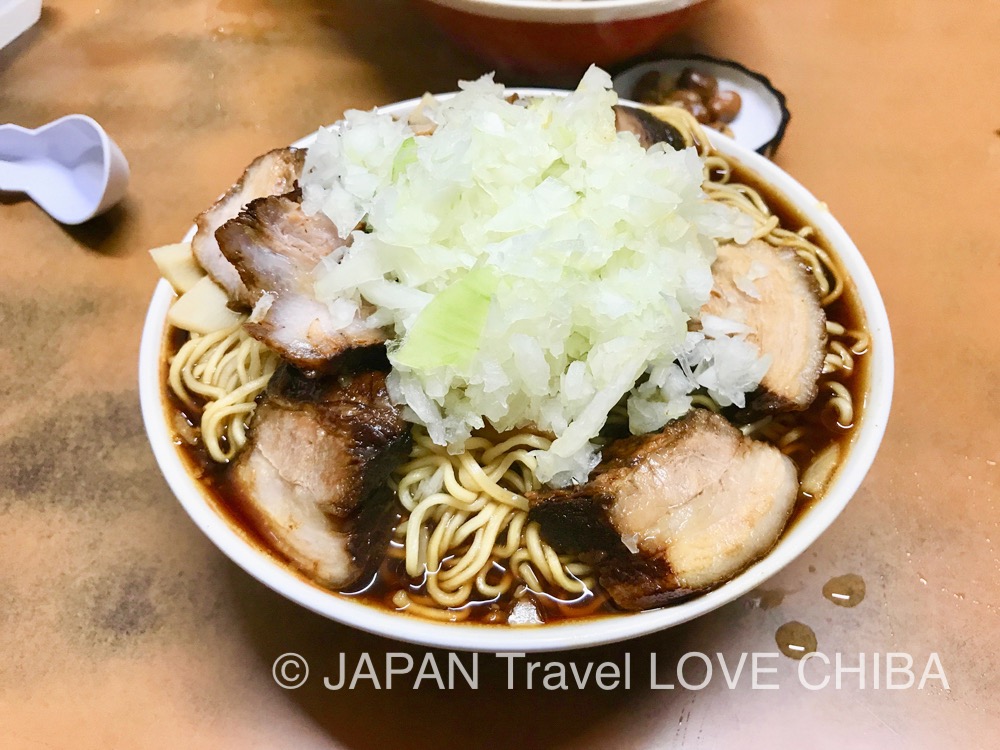 The ramen is made from a simple broth of hot water and pork cutlet, and the noodles used are dried rather than raw. Large slices of rich pork cutlet are added to the dish following the original recipe from over 60 years ago.
The soup with its deep color is brimming with noodles and pork even when you order a regular sized portion. The savory mix of soy sauce and pork come together for an unmatched flavor, truly one of Chiba’s gourmet treats.

With the shop’s long hours, it is best to try to avoid the lunch rush. We recommend enjoying the day traveling about and then stopping in for dinner.

The shop is a 17 mins drive from Mother Farm. Our previously recommend fried mackerel shop is also nearby! After two weeks of a typhoon rolling through, blue skies finally returned.A short distance away from Chiba's Kazusaminato Station is the sake brewery Wakura. Sake preparation begins in November, but befor…

After two weeks of a typhoon rolling through, blue skies finally returned. A short distance away from Chiba’s Kazusaminato Station is the sake brewery Wakura. Sake preparation begins in November, but before that, we headed over to greet them. The head of the brewery recommended the place we had lunch.
A favorite among fishermen we planned to have Takeoka Ramen near Takeoka Station, but instead went to Murutoshi which serves coastal cuisine.

Caught in Chiba, the “Golden Mackerel” with speckles of gold coloring is a sought after delicacy. The reason is, this type of mackerel is only found where food is plentiful and thus has a larger build of delicious fats! A set including the fried mackerel and 5 types of sashimi is 1800 JPY. The fresh sashimi and perfectly crispy mackerel makes for an excellent meal! For a region surround by the ocean, it is no wonder they pull in such fresh seafood.

Definitely try visiting and getting a taste of the region for yourself!

After arriving at Narita Airport, the crew filmed on location for 7 days and 6 nights. The crew was joined by 4 Hong Kong television personalities. Including our 2 interpreters, there were 6 people total. (The above photo is of unrelated parties)

Before the crew arrived in Japan, many schedule changes almost lead us to giving up on the visit, but I am glad that was not the case. After spending time living and sharing meals with the crew for several days, we were able to re-experience Chiba tourism through their eyes. I myself was also able to gain some new insight. The Japan tourism that we see as Japanese and the appeal of Japan tourism that foreigners see is quite different. That was just one of the things that the crew taught me, and I definitelyfeel it changed my perspective.

Outside of work, I was also very interested in learning about their way of life andtheir perspectives. We talked about many things including how, just like in Japan, it is difficult for women to have a good work-life balance in Hong Kong.You might call it globalization, but even though there was a language gap, that gap disappeared due to our shared concerns for women.

As we saw them off on their way back home, I could not help but be glad that we were able to work together with the cooperation of the facilities in Japan. I am very grateful for the collaboration of both parties.

The broadcast will air in December. I am excited to see how things come together.

This year at the Visit Japan F.I.T. Travel Fair 2017, we had a booth, LOVE CHIBA, on display as we highlighted Chiba tourism. 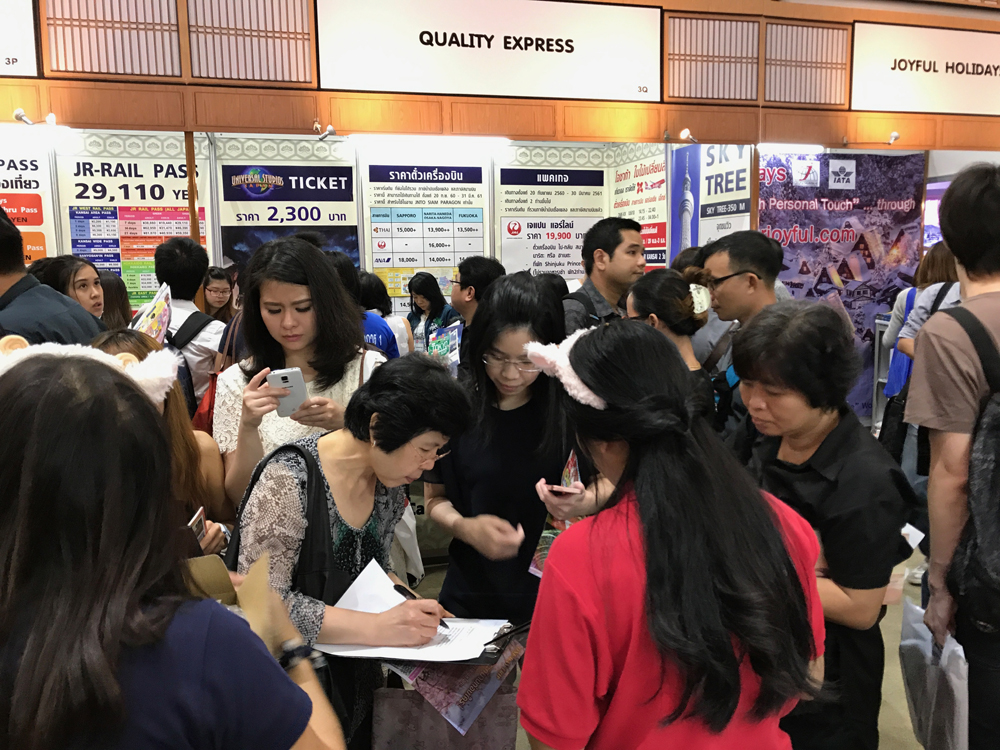 This time we traveled to Bangkok after promoting the Tokun and Nabedana Breweries as well as Chiba Sake at Sakelism in Taiwan, which made for quite a long business trip.

Not able to overcome the language barrier even with the taxi, we reserved a shuttle bus. A comparatively high price, but it is hard to compare with the ease of mind that it gave us. From Suvarnabhumi International Airport to the hotel, it cost us about 6000 JPY.

After a long trip, it was nice to find that the hotel room had its own mini kitchen. The low price and spaciousness of the room was also great. They even had a paid laundry area. 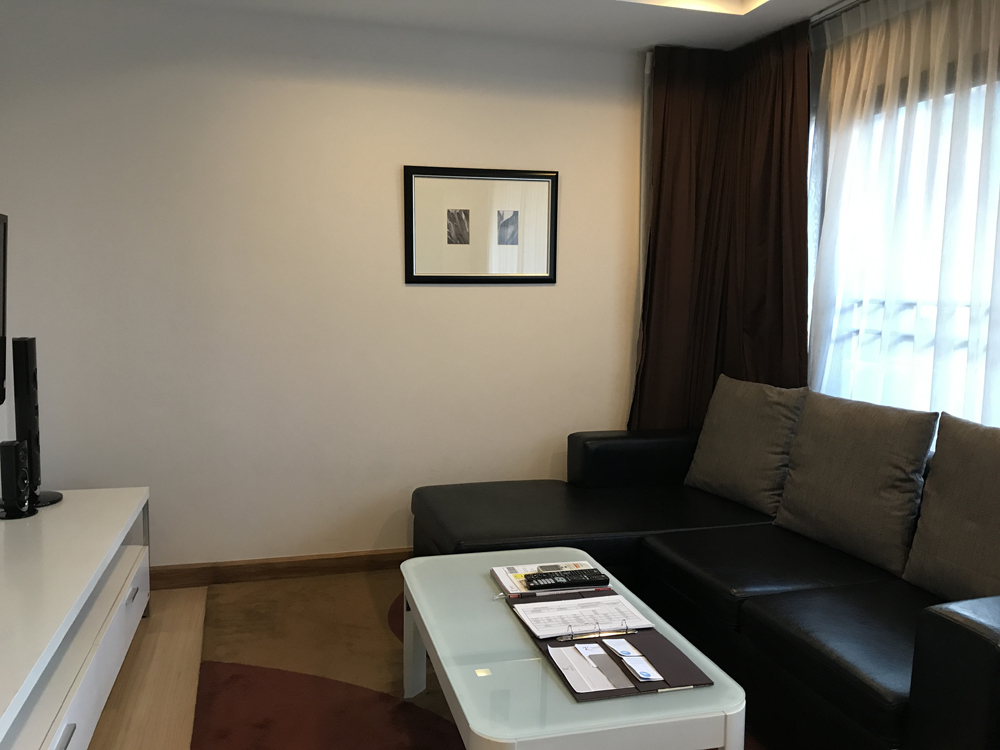 Here was our accommodations.
Baan K Managed By Bliston

We then had the 3 day travel fair. Last year there were 600 thousand attendees, and this year many people came to see as well. Since Siam Paragon is on par with other high-class facilities, there were many affluent Thai people who have spent a lot of money in Japan. The average salary has also grown to be on level with Japan. (Results from our survey)

Thanks to the help of the staff, we were also able to try many delicious foods. 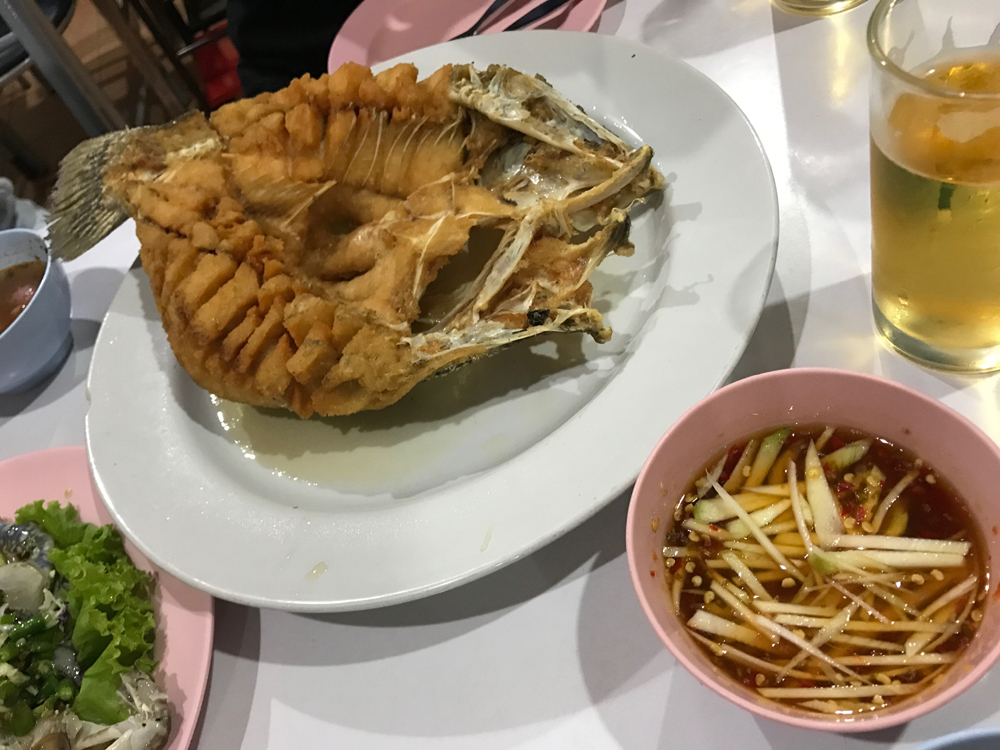 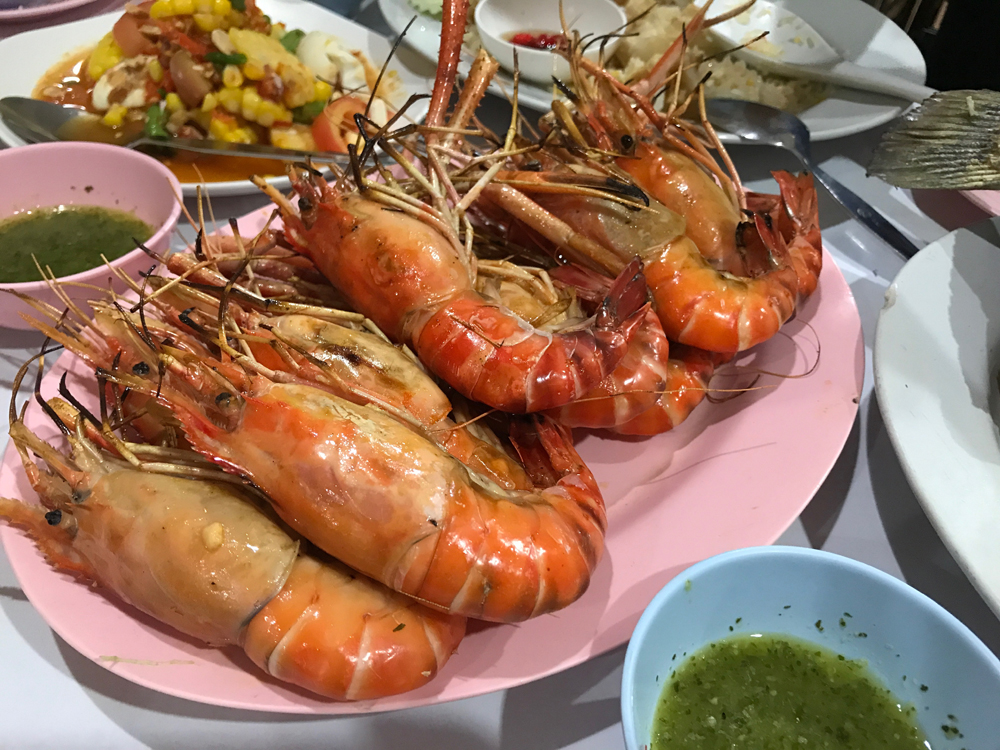 Restaurants mainly spoke in English, and were friendly. Not to mention cheap! 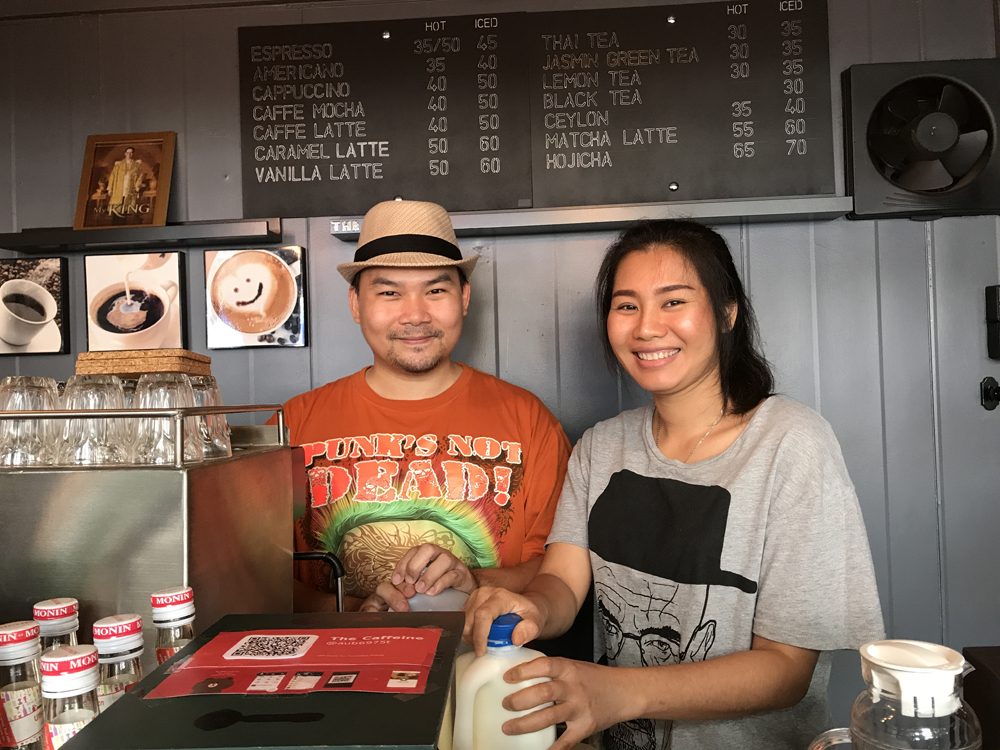 There also seemed to be many American and European tourists. We now look forward to next year February in Thailand. Next time we will headto Chiang Mai for business discussions. Chiang Mai, here we come!